Challenging Inventorship on Summary Judgment? Put a Cap on It

The US Court of Appeals for the Federal Circuit, citing a dispute as to material facts, held that a factfinder could reasonably conclude that an alleged joint inventor failed to sufficiently contribute to inventing the claimed technologies and thus reversed a district court order granting summary judgment of invalidity based on failure to join an inventor. Plastipak Packaging, Inc. v. Premium Waters, Inc., Case No. 21-2244 (Fed. Cir. Dec. 19, 2022) (Newman, Stoll, Stark, JJ.)

Plastipak sued Premium Waters, asserting 12 patents directed in part to the neck portions of lightweight plastic containers and preforms. These neck portions include a dispensing opening, a tamper-evident formation (TEF) that indicates if the container has been opened and a support flange/ring to facilitate manufacturing handling: 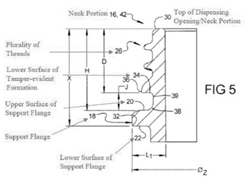 The patents list Richard Darr and Edward Morgan as inventors. Premium Waters countered that the patents should have included a third co-inventor, Alessandro Falzoni, an employee of another company with whom Darr and Morgan had collaborated on a project involving a design that included a neck portion, a specialty closure and a discontinuous TEF. Premium Waters moved for summary judgment of invalidity on the theory that the failure to include Falzoni as a joint inventor rendered the patent invalid, contending that Falzoni contributed the following to the invention:

Plastipak contended that the asserted inventors were the sole inventors and that discontinuous TEFs (Falzoni’s alleged contribution) were merely state-of-the-art.

In granting the motion for summary judgment, the district court observed that Falzoni was “at least” a joint inventor because he had disclosed to one of the named inventors a neck finish measuring less than 0.580 inches with a discontinuous TEF in the form of an image of a 3D model that “constituted clear and convincing evidence of Falzoni’s disclosure, leaving ‘no doubt’ that the image ‘contributed significantly to the conception of a complete neck finish.’”

That model’s support ring lacked a lower surface, however, and Plastipak argued that without a lower surface the 3D model’s X dimension was undeterminable.

Plastipak also argued that Falzoni’s email circulating the 3D model stated that “[t]he area below the neck support ring has been left undefined” and seemingly invited the named inventor (Darr) to finalize it. Darr did so and, on the same day, emailed Falzoni a schematic depicting a support ring with a lower surface and a 0.591-inch X dimension.

Falzoni testified that while he calculated that the model had a ~0.563-inch X dimension, that calculation was based on “a reasonable indication” of where the support ring’s lower surface should be, and that the absence of an actual lower surface introduced a margin of error.

The district court nonetheless noted the robust record of collaboration between Falzoni and Darr (especially with respect to the 3D model and the correspondence it spurred) and the circumstance of Plastipak terminating its business relationship with SCAMI the same month that it began prosecuting the patents now asserted against Premium Waters.

With regard to the discontinuous TEF inventorship issue, the Federal Circuit found that Plastipak marshalled sufficient evidence (e.g., prior art patents and Falzoni’s statements) upon which a factfinder could reasonably conclude that Falzoni merely contributed the state of the art. The Court reiterated that merely contributing the state of the art does not amount to inventorship and determining the state of the art is a factual question. Accordingly, the Court concluded that resolving that factual question was necessary to determine whether Falzoni was a joint inventor of the claimed discontinuous TEF.

Regarding the X dimension inventorship issue, the Federal Circuit “agree[d that] Premium Waters presented sufficient evidence” upon which a reasonable factfinder might find that Falzoni was an inventor consistent with patent invalidity’s clear and convincing standard. But the Court explained that an even higher standard must be met to justify a grant of summary judgment: the record must require all reasonable factfinders to find that Falzoni was a joint inventor even after those factfinders resolved all fact disputes and drew all reasonable inferences in Plastipak’s favor. The Court found that this high standard was not met, pointing to Falzoni’s deposition equivocations and explaining that one could reasonably conclude based on the record that Falzoni deferred the 3D model’s support ring design to Darr.

Finally, the Federal Circuit noted that the district court appeared to ignore Plastipak’s expert testimony that challenged Premium Waters’ position regarding the 3D model and other evidence Plastipak introduced that tended to show that Darr and his named co-inventor (Morgan) independently arrived at the 0.580-inch X dimension upper limit. The Court explained that it understood the district court’s skepticism towards Plastipak, including the circumstances surrounding Plastipak’s failure to timely disclose evidence to a degree that raised an appearance of hiding evidence. However, the Court noted that this conduct did not erase the evidence that Plastipak ultimately produced, nor did it alternatively leave Premium Waters’ position uncontroverted on issues Plastipak’s witnesses professed not to recollect. The Court reiterated that “the factfinder, not the trial court at summary judgment, [] weigh[s] all of the competing evidence and draw[s] its own reasonable conclusions as to inventorship.” The Court thus reversed the district court’s grant of summary judgment and remanded.

Practice Note: The Federal Circuit stressed that the line between inventive contributions and “more prosaic contributions” is difficult to draw and emphasized that this case illustrates how drawing this line is often “bound up with material fact disputes which a reasonable factfinder could resolve in favor of either party.”