Addressing for the second time whether the design of a chocolate-dipped, stick-shaped cookie was eligible for trade dress protection, the US Court of Appeals for the Third Circuit held again that the product configuration was functional and therefore not subject to trade dress protection, affirming summary judgment for defendant Lotte International America Corp. Ezaki Glico Kabushiki Kaisha v. Lotte Int’l America Corp., Case No. 19-3010 (3d Cir. Jan. 26, 2021) (Bibas, C.J.)

Both Ezaki Glico Kabushiki Kaisha and Lotte make thin, stick-like cookies with one side dipped in chocolate or flavored cream. Ezaki Glico’s product, Pocky, and Lotte’s product, Pepero, can be seen in the images below. Ezaki Glico obtained two incontestable trade dress registrations for its Pocky product design as well as a utility patent for a “Stick Shaped Snack and Method for Producing the Same.” 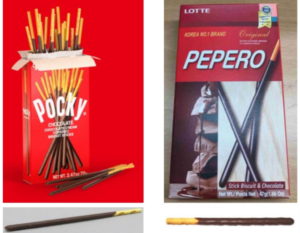 In 2015, Ezaki Glico sued Lotte for trade dress infringement. The district court found the Pocky product configuration functional and therefore not subject to trade dress protection, and granted Lotte’s motion for summary judgment. In October 2020, on appeal, the Third Circuit issued its initial opinion affirming the district court’s decision and rejecting Ezaki Glico’s argument that its trade dress was not functional because it was not essential to its product. (Read more on the initial opinion here.)

Ezaki Glico petitioned for a rehearing en banc, which the Court rejected. Nonetheless, the original panel vacated its earlier ruling and issued a revised opinion that provided further clarification on the functionality doctrine, but likewise affirmed summary judgment for Lotte and held that the Pocky product configuration was functional.

The Third Circuit again rejected Ezaki Glico’s attempts to equate “functional” with “essential”: “If the Lanham Act protected designs that were useful but not essential, as Ezaki Glico claims, it would invade the Patent Act’s domain. Because the Lanham Act excludes useful designs, the two statutes rule different realms.” The Court cited examples from earlier cases to demonstrate that the proper inquiry for functionality looks to whether the particular design chosen for a feature, as opposed to the feature itself, is useful: “Though French press coffeemakers need some handle, there is no functional reason to design the particular handle in the shape of a ‘C.’ . . . And though armchairs need some armrest, there is no functional reason to design the particular armrest as a trapezoid.”

The Third Circuit looked to Ezaki Glico’s registrations for the features of the claimed trade dress, noting that in this case, “[e]very feature of Pocky’s registration relates to the practical functions of holding, eating, sharing, or packing the snack.” Accordingly, the designs chosen for the Pocky configuration rendered the product more useful as a snack and were “not arbitrary or ornamental flourishes that serve only to identify Ezaki Glico as the source.” Having determined that Lotte sufficiently demonstrated that the Pocky trade dress was useful, the Court held that it was “thus functional” and not subject to [...]